The Stranger Things Premium Pinball Machine by STERN Pinball comes with 1 year warranty and we have the lowest price for the Official US version.Can you solve the mysteries of the upside-down world of Hawkins Indiana? Find out in STERN Pinball’s release of Stranger Things!

This pinball machine has been fully reconditioned to a brilliant condition and has been through a thorough inspection to ensure that it plays perfectly with no errors.

The Stranger Things Premium Pinball Machine by STERN Pinball comes with a 1 year warranty and we have the lowest price for the Official US version.

Can you solve the mysteries of the upside-down world of Hawkins Indiana? Find out in STERN Pinball’s release of Stranger Things!

Origin of  The Game

Bursting onto the Netflix streaming service in 2016, Stranger Things shook up the sci-fi and horror genres, quickly becoming one of the most acclaimed pieces of TV entertainment of all time. STERN Pinball has taken the talent of legendary pinball designer Brian Eddy to bring the peculiar, upside-down world of Hawkins Indiana to pinball playfields all over the world, complete with encounters with strange phenomena and a one-on-one battle with the show’s dangerous Demogorgon. Brian Eddy’s designs are known to pinball fans across the world, being responsible for some of the most consistently high rated games of all time, including Medieval Madness, Attack from Mars and The Shadow. 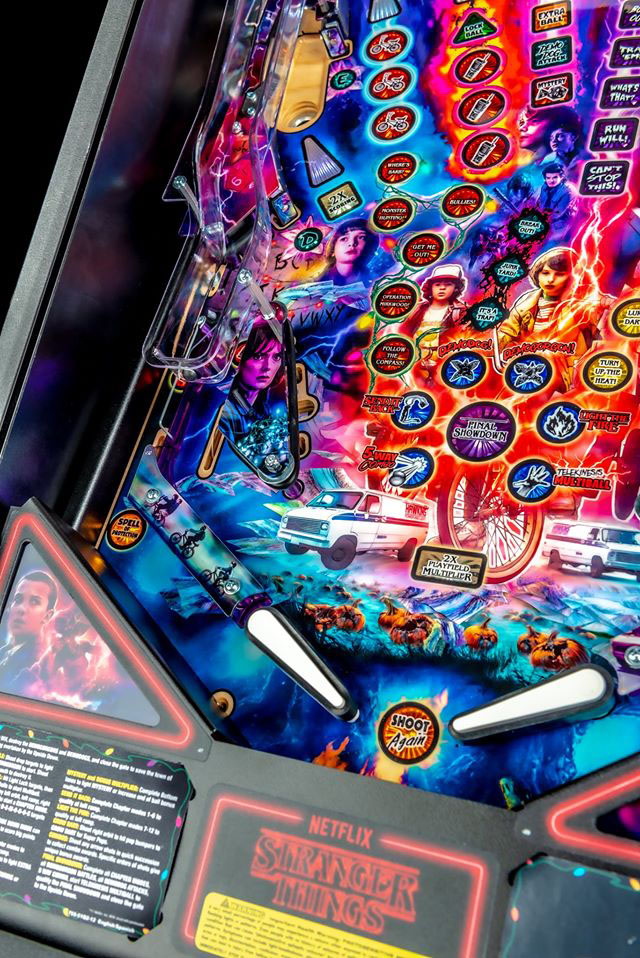 The Premium version of Stranger Things includes a whole host of additional features and embellishments to make it one of the pinball machines of all time. Full RGB LED lighting covers the playfield, allowing any insert to display any colour. There are plenty of additional physical playfield features too. For example, the game features a built-in projector in the game’s lower arch, which projects scenes from the show onto the large screen in the middle of the playfield, and even onto the ramps to dynamically change the playfield as the game progresses. There is even a dedicated magnetic ball locking system, that holds pinballs in the air, suspended by the mysterious Eleven Telekinesis force. 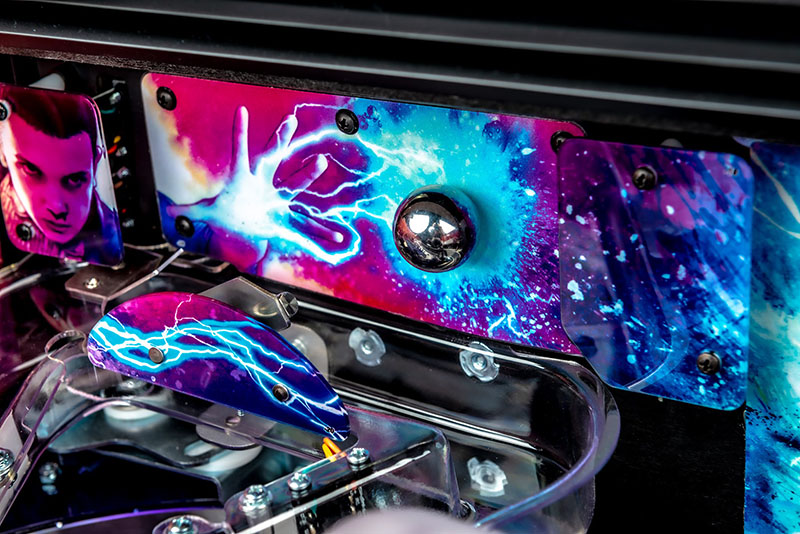 Netflix’s Stranger Things has been regarded as an immediate hit with critics and audiences alike with its intriguing enigmas of monsters, experiments and the supernatural. STERN Pinball’s Stranger Things is the perfect way to recapture of every strange encounter and atmosphere of the show. 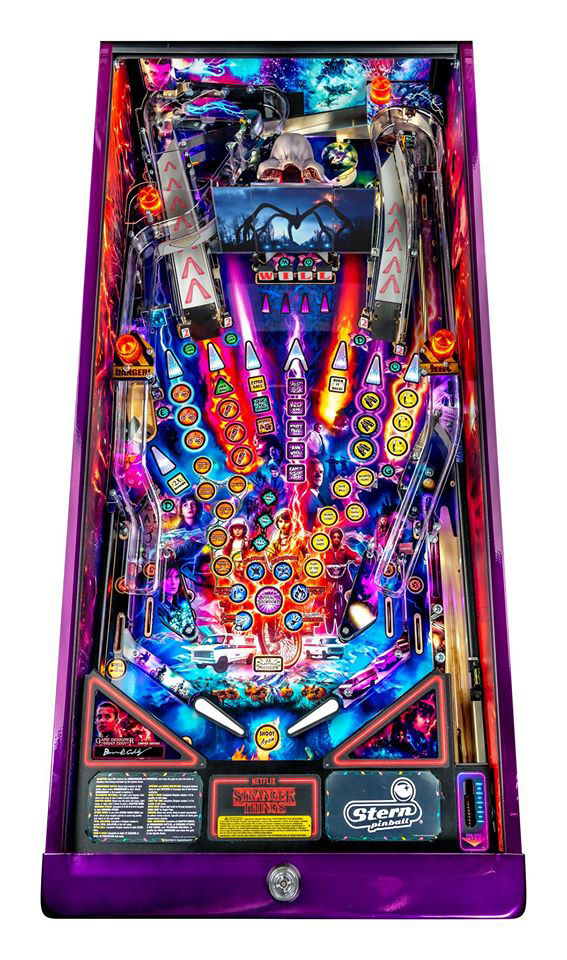 Stern’s Stranger Things Pinball is available in three versions – The Pro Edition, the Premium Edition, the Limited Edition model. A sheet comparing the features of these three machines will be available in a sheet that can be viewed here:

Please note that all photos are of an unreleased product, and are subject to final changes before release.

This pinball machine has been fully reconditioned to a brilliant condition and has been through a thorough inspection to ensure that it plays perfectly with no errors.

On Display in Our Showroom:

If you fancy checking out a new pinball machine, we have a fantastic selection on display in our showroom, set to free play, so you can enjoy a few games to get a feel for them for yourself.

Even if we don’t have the exact game you are looking for set up in the showroom, we can talk you through all the options available to you, whether you’re a pinball fanatic or looking for that single table to kickstart your own collection.

We recommend phoning our showrooms ahead of your visit so we can give you a rundown of every machine we currently have on display to try.

We are keen pinball enthusiasts and have experience of owning and playing a wide variety of pinball games. If you are looking for high quality impartial advice it is definitely worth paying us a visit. There’s nothing like playing a few games to get a real appreciation of how good a game really is.

For more details see our Showroom page. For directions see our How to Find Us page.
Stern Stranger Things Premium Measurements:

Please ensure you fully check that a pinball of this size will fit into your intended location.

The company traces its lineage to Philadelphia in the 1930’s when Sam Stern got into the business of operating pinball games.  These new games were all the rage in bars and restaurants, and game operators were making a very good living.  Sam became so successful as an operator that he soon became a game distributor as well.

In 1947, Sam visited Williams Manufacturing Company in Chicago where, according to pinball industry folklore, he brazenly put his feet up on Harry Williams’ desk and asked, “Why don’t you sell me your company?”  Because of Sam’s success as an operator and distributor, it took Harry only three hours to decide to sell half of the company to Sam.

Sam moved to Chicago and became President of Williams.  Through the ‘50’s and ‘60’s, he and Harry worked tirelessly to build Williams into one of the leaders in the burgeoning pinball industry.

Sam passed his passion for pinball on to his son, Gary, who as a child played in empty game boxes on the factory floor at Williams.  Gary was only 16 years old in the 1960’s when he started working for his father in the stock room at Williams.

The late ‘70’s and early ‘80s saw the emergence of coin-operated video games.  As the coin-op market evolved, other companies acquired many of the existing pinball companies.  In 1986, after the death of his father, Gary founded Data East Pinball, which was purchased by Sega in 1994 and became Sega Pinball.   In 1999, Gary bought the business back from Sega and renamed it Stern Pinball, Inc.  Less than a month later, Williams announced plans to cease pinball production in order to focus on the slot machine business.

Through the first decade of the new millennium, SPI has continued to carry the pinball banner and promote the game throughout the world.  The company has released many popular games, including Pirates of the Caribbean, Indiana Jones, Shrek, Batman, Spiderman, the Simpsons Pinball Party and many more. Its games continue to be enjoyed by both pinball enthusiasts and casual players around the world.

This pinball machine comes with a 1 year parts warranty. All parts that are faulty will be replaced. Often we can solve any problems over the phone and supply any necessary components for the customer to fit. If necessary our specialist repairer can visit your home to inspect and repair your machine on-site, but this would be chargeable. Please call us for a call-out quotation. If parts are required which are not carried at the time these will need to be ordered for you, and will sometimes need to be imported from the States – therefore, there can be a wait for the part to arrive.

After our 1 year warranty has expired we will continue to offer you complete support for any problems you have, either over the phone or by email, and can provide a chargeable engineer call out should it be required. Whatever happens, we will be able to look after you and your pinball machine.

Pinball machines are complicated items, which don’t like being moved about, nor do they like the cold or humidity. Therefore, if you chose to move the pinball machine from where we originally installed it, or it is stored in a cold or damp location, our warranty will become null and void. We won’t be able to supply any parts for your machine free of charge if it has been accidentally damaged or you have tampered with it in any way.

We offer the same warranty as detailed above for our home customers, but for 30 days.

There are no reviews yet.